Interactive art exhibit of lights was opened to the public on the 2nd of December.

The project “Kamp-Lintfort Illuminated” (Kamp-Lintfort leuchtet) began in July 2013. Prof Dr Karsten Nebe and students of Rhine-Waal University of Applied Sciences, in cooperation with Stadtwerke Kamp-Lintfort, the cultural foundation Rheinland of the Sparkasse, the energy concern RWE Deutschland AG, the Duisburg branch of the Sparkasse and RAG Mining, developed an interactive art exhibit of lights, which was opened to the public on the 2nd of December. The massive array of lights is installed on RAG Mining’s former distribution station in the Bergwerk West colliery, which sits in view of the Kamp-Lintfort Campus.

Together with the project’s development team and supporters, Rhine-Waal University of Applied Sciences unveiled the new "Kamp-Lintfort Illuminated" project on Tuesday, December 2nd, and brought Kamp-Lintfort alive with lights. The impressive display is illuminated in patterns by an array of 126 separate lights, which “look like the pixels of a monitor”, as Prof Dr Karsten Nebe, Professor of Computer Science at Rhine-Waal University of Applied Sciences puts it, “and like a monitor they’re used to project the ideas of students, pupils, artists and residents of Kamp-Lintfort.” The project’s initiators planned to incorporate this kind of interactive dialogue with as many people as possible from the project’s very beginning. The project, which began in July 2013 under the supervision and mentoring of Prof Dr Karsten Nebe, is the fruition of a long series of workshops and semester projects, which were used to develop and test innovative technical and design concepts in order to find the best one for this purpose. With the unveiling of the display and the first visualisations, the group’s hard work has paid off.

But they’re not done yet: The next step in the project is to launch an accompanying website, www.kamp-lintfort-leuchtet.hsrw.org, which is scheduled to go online before Christmas 2014. The ambitious website will include insight into project details and allow users to not only see the display online in real-time, but also to submit new designs for the project team to display. Thanks to special sensors developed by Rhine-Waal students, submitted designs can differ in more than colour and sequence: They can also include interactive elements. For example, a concept might “react” to passers-by with fluctuations in volume or brightness. Prof Dr Nebe also announced plans for the development of new ways to alter and influence the light display and allow even more interesting design concepts.

What’s more, a jury will select the best submissions and distinguish them in a public event in the coming year. Students, pupils and teachers are already hard at work planning collaborative workshops where groups come up with creative new designs in a variety of different categories.

Rhine-Waal University and the project team would also like to extend their special thanks to the project’s supporters and partners, who made the entire project possible with their generous financial support. 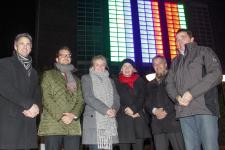