“I don’t need any liberation!”: A look back at the Special Theme Day “Ukraine” in Kleve and Kamp-Lintfort on 23 March 2022

Many people wanted to see a special theme day focused on the war in Ukraine hosted at HSRW. Thus, two events were quickly organised and held this past Wednesday for both Kamp-Lintfort and Kleve, hosted by the Faculties of Communication and Environment and Society and Economics.

In Kamp-Lintfort, the event began with Professor Dr habil. Khrystyna Dyakiv, Chair of Intercultural Communication and Translation Studies at the Ivan Franko National University of Lviv. Her talk, titled “A Look at the History and Present (and Future) of Ukraine”, began with the history of Ukraine: from the territory of Ukraine in both the middle ages and modern times, to Ukraine in the Soviet Union, the Holodomor and the Chernobyl nuclear disaster. She then spoke about recent developments in Ukraine such as the Orange Revolution, the Revolution of Dignity, the past eight years of war in Donetsk and Luhansk, and the Russian invasion in February 2022. She also touched on the current linguistic and cultural situation with regard to Ukrainian and Russian in Ukraine. She concluded her talk with her own experiences in the first days of the war, her escape and arrival with her daughter in Germany, and the overall situation for Ukrainian refugees in other parts of the country and abroad. 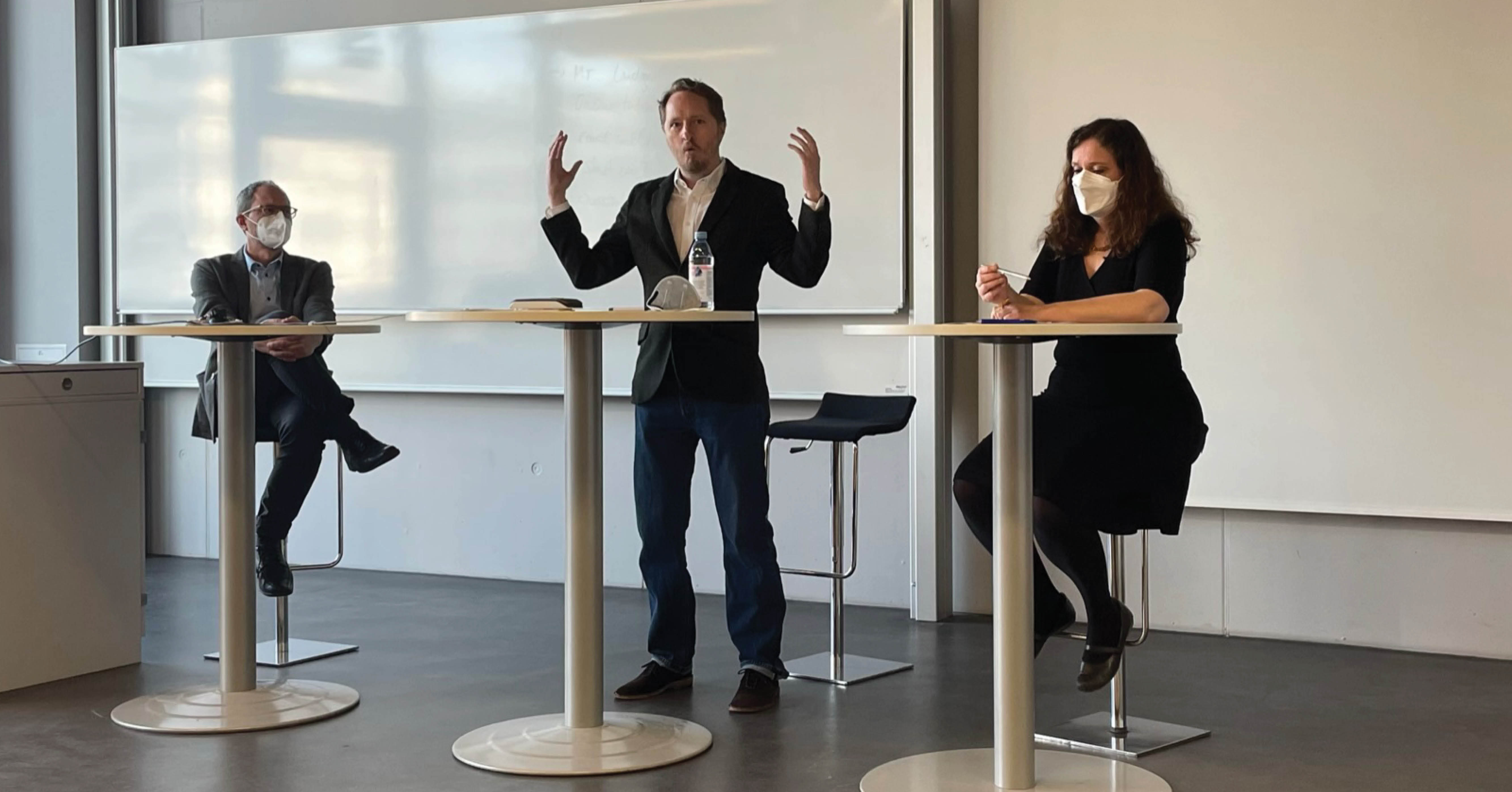 In Kleve, the event began with talks from Professor Dr Jakob Lempp, Professor John Henry Dingfelder Stone and Professor Dr Eva Maria Hinterhuber. Each gave their own personal assessment of the war in Ukraine through the lens of their specific fields of expertise. Dr Lempp, Professor of Political Science with an emphasis on International Relations, spoke about the various figures behind the war in Ukraine and their driving interests. He emphasised that the stated reasons for the war always depend on who is being asked and that there are a whole slew of possible answers to this question. He also explored possible conclusions to the war, from Ukraine’s total defeat to a democratisation of Russia.

Henry Dingfelder Stone, Professor of Law with an emphasis in International Law and Public Law, analysed the war through the lens of international law. He made clear that the war was most certainly not a “special military operation” or even a “humanitarian military operation” as claimed by Putin, but rather an illegal invasion of an independent, sovereign nation per international law. In response to Putin’s narrative that Ukrainians wanted “liberating”, Professor Dingfelder Stone noted sardonically: “I don’t invite someone into my apartment and start attacking them [if I want them there].”

Professor Dr Eva Maria Hinterhuber, Professor for Sociology with an emphasis on Gender Studies, spoke about Putin’s authoritarian system of rule, Russia’s war of aggression on Ukraine from a gender-based perspective, and how civilians are resisting, focusing in particular on the power of mothers’ protests, both in Russia’s past and present. In the follow-up discussion with students, many expressed concern that Putin might be eyeing other countries in Europe as well. The role of NATO in the conflict was also a point of discussion as well. 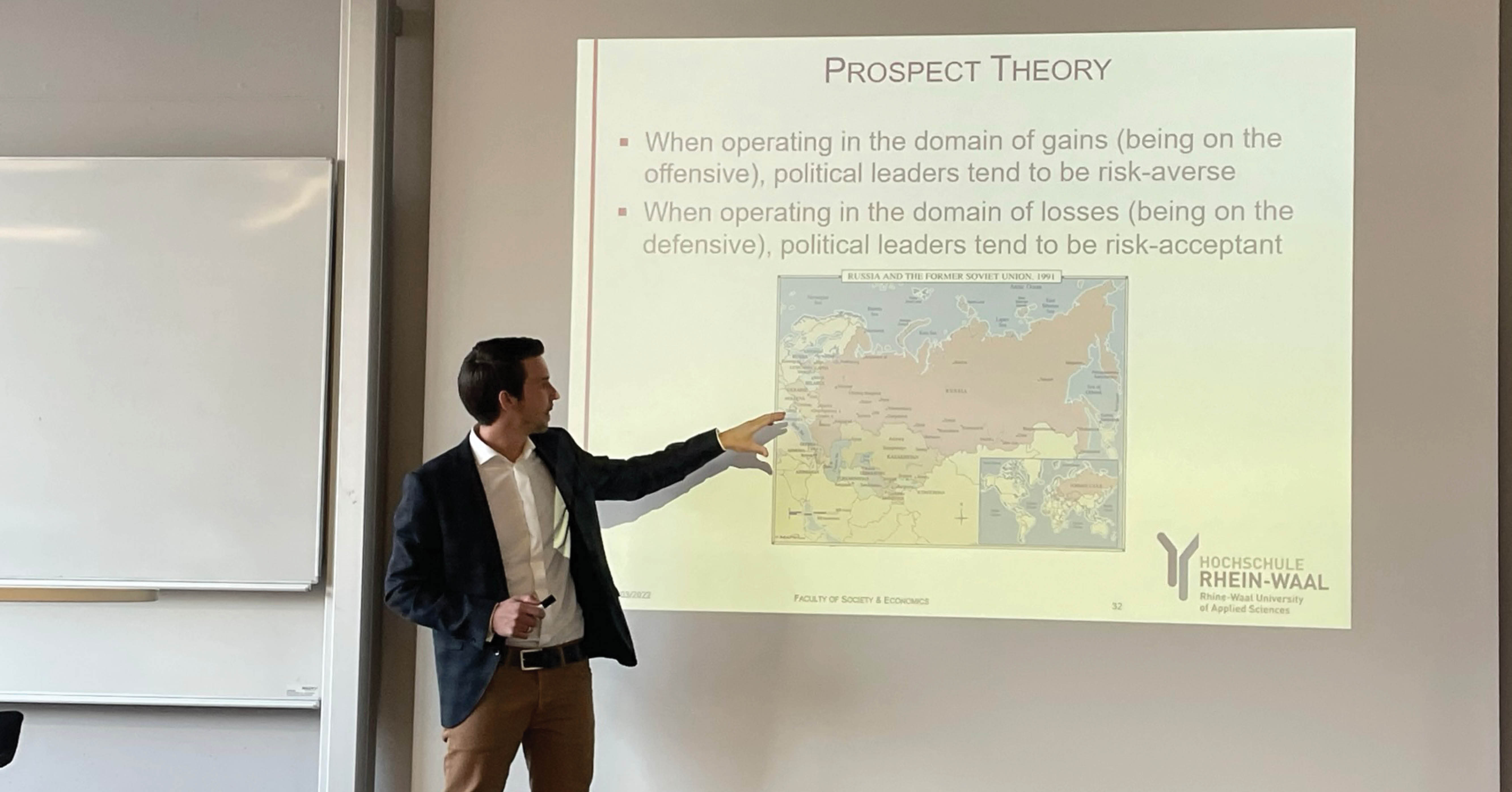 Two talks followed the discussion. First, Dr Niklas Rolf, political science researcher with a focus on international relations, provided an empirical analysis of the war in Ukraine prior to 2016. He looked at various verbal and physical actions taken by the EU and Ukraine on the one hand and compared them to the words and actions of the DPR/LPR separatists and Russia on the other. His data-based conclusion was that Russia and the separatists acted much more aggressively in the lead up to the war than Ukraine and the EU. 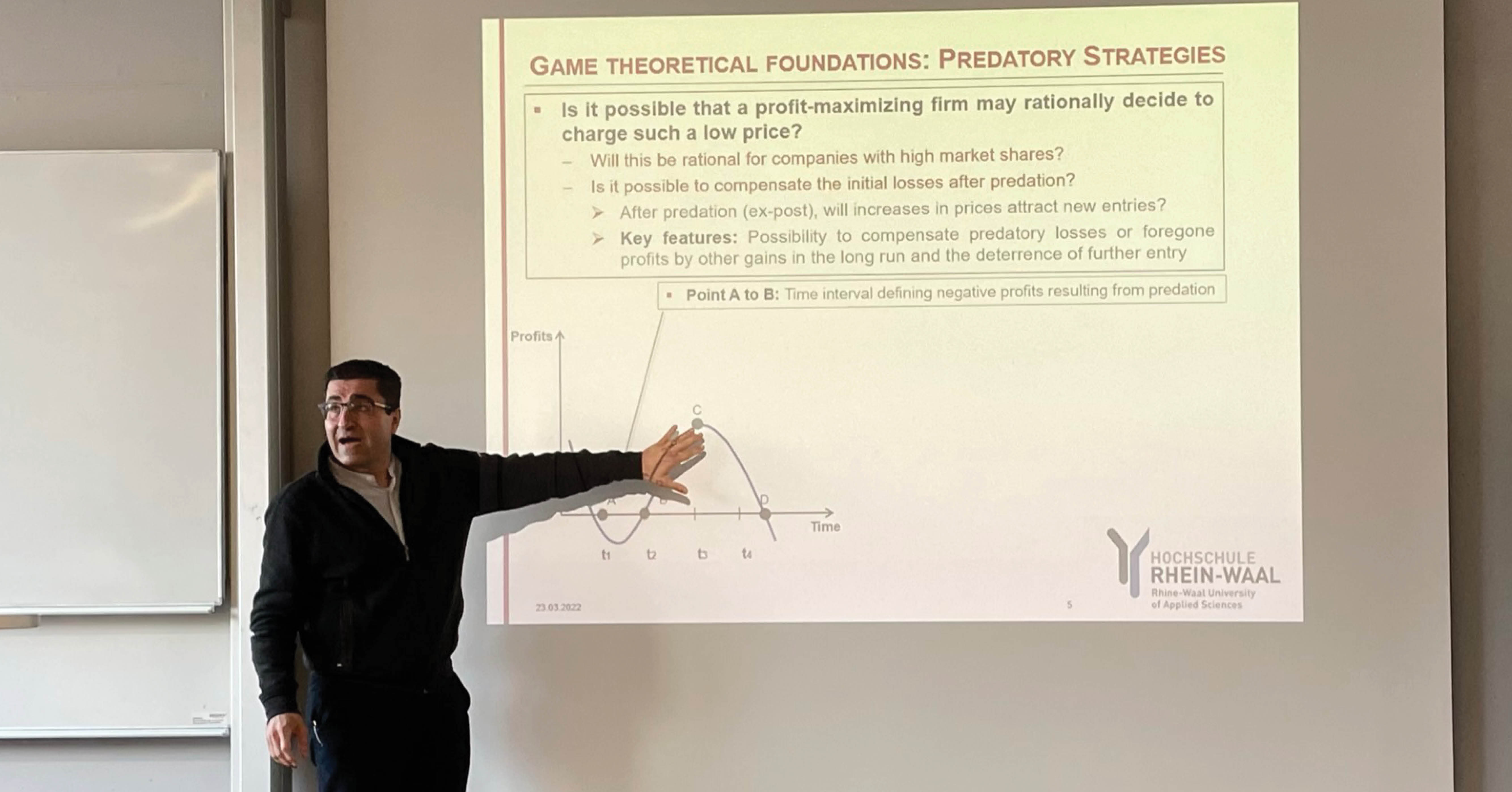 Next, Professor Dr Hasan Alkaş, Professor of Microeconomics with an Emphasis on International Markets, examined the war from a game theory perspective, focusing in particular on how sanctions and the strong signals from the West might affect the course of the war. His conclusion: in game theory and in this conflict there’s no win-win. Early sanctions before the invasion may have prevented the war, but post-invasion they only serve to make Putin more aggressive. Furthermore, the longer the war continues, the higher the toll will be for Ukraine and the more concessions Putin will expect before withdrawing his forces. Professor Alkaş also ran through various scenarios for how the war may play out, including the possible use of nuclear weapons. 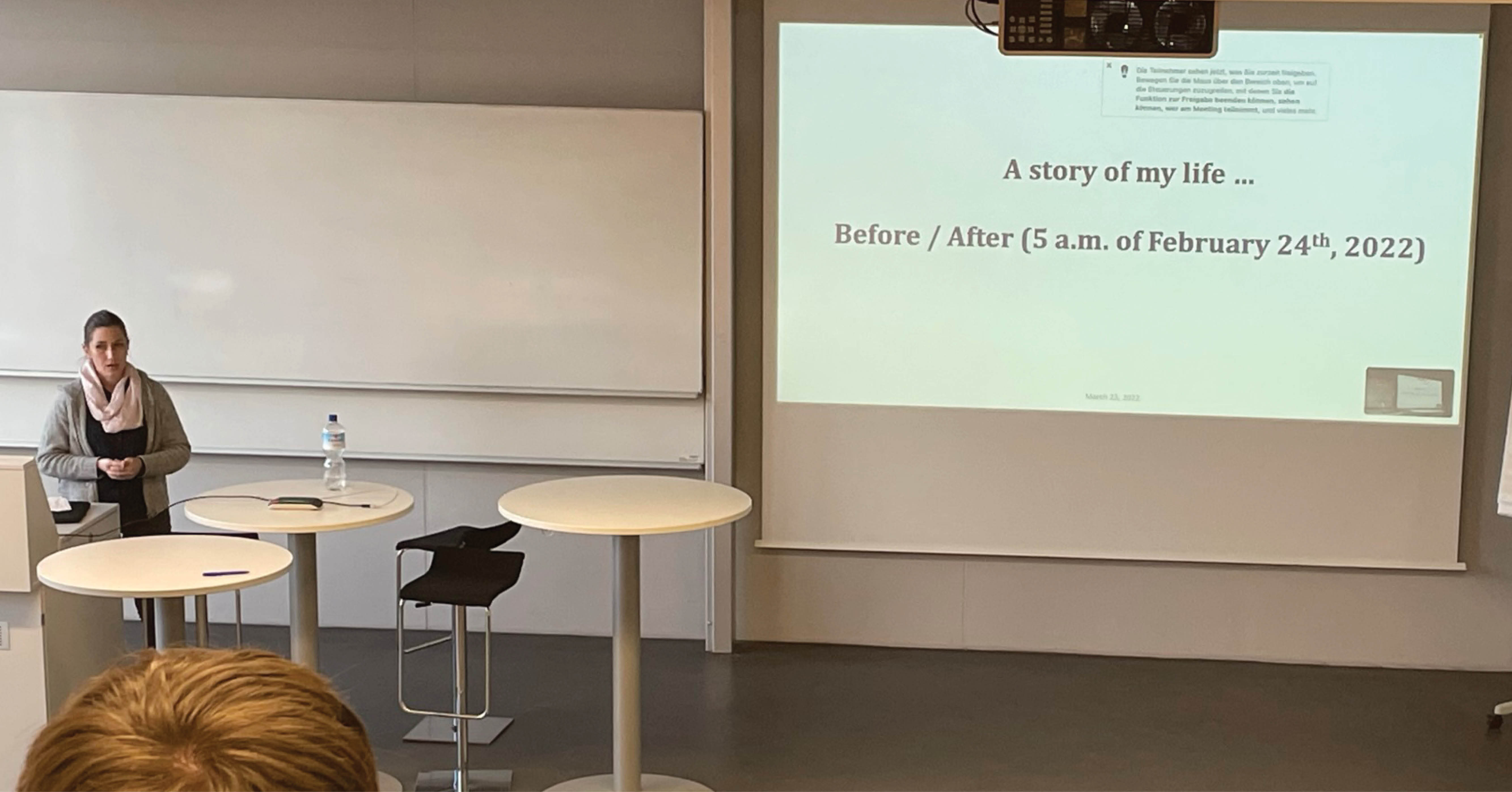 Finally, Dr Natalia Shyriaieva, Professor of International Business at the National Technical University of Kharkiv, spoke about escaping from the war with her 8-year-old daughter and their flight through Poland to the Lower Rhine, where they are staying with Professor Dr Gregor van der Beek, whom she has known professionally for years. She spoke about how her life suddenly changed on 24 February 2022, the day of the invasion. She recalled the sounds of explosions, things she had only ever heard in films, and the danger and fear she felt while fleeing the city. Though she has felt safe again since arriving on 7 March 2022, she still has no idea whether her office, or even her university, are still standing. She is greatly relieved to have found shelter and support here, but hopes for a quick end to the war.

Her colleague, Professor Dr Taras Danko, also a Professor of International Business, connected to the discussion live from Ukraine. Though not currently in Kharkiv, he is safely sheltering in the western half of the country. Professor Danko was visibly enraged by the Russian invasion, stating plainly: “I don’t need any ‘liberation’!” He stressed that prior to the invasion, Kharkiv was a city full of life. Now, many sections of the city have been reduced to rubble. He hopes for a ceasefire soon and that institutions and infrastructure will be quickly rebuilt after the war.

The event attended by a large number of students, employees and members of the public. Similar events are currently being planned.