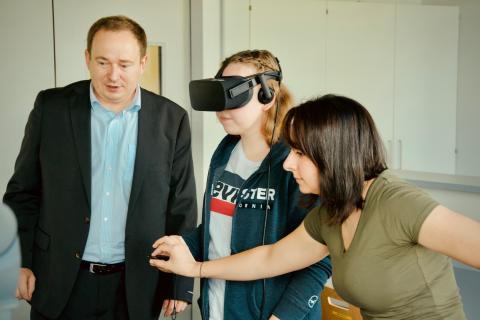 From your pocket to your own four walls: In times of smartphones and smart homes, communication between man and machine is becoming increasingly simple and direct. Haptic interfaces are more and more being replaced by non-contact interfaces, such as speech or facial recognition systems. For a successful integration of such interfaces into everyday use, the underlying systems have to be beneficial for everyone and usable without long training phases. In the M³S project, we develop human-machine interfaces suitable for everyday use, in which mainly EEG data, i.e. brain signals from users, are used to control computers and other external devices. These direct interfaces between brain and machine are also known as BCI, short for Brain-Computer Interface.

In our systems, various methods to derive control commands from brain signals are used. Most methods are based on a visual stimulation of the eye: individual light stimuli, continuously flashing signals or pseudo-random stimulation patterns each produce their own, characteristic responses in the visual cortex of the brain. These naturally occurring stimulus responses can be measured noninvasively using electroencephalography (EEG) and converted to computer instructions in real time by the BCI software. By, for example, assigning different stimuli to different boxes on a screen, it is possible to read from the brain signals which box the user is concentrating on and a specific control signal is forwarded to the machine. 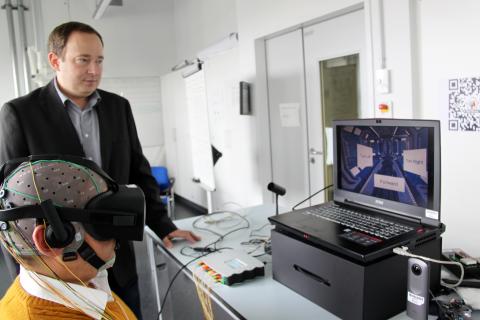 We expect that in the future BCIs will play a major role in various industries, such as the gaming industry or the automotive industry. In order to increase the attractiveness of BCIs for these fundamentally different areas, different core requirements must be met and further developed. For manufacturing industries, these are essentially precision and reliability. In other areas, where personal safety might not be as important, other factors such as adaptivity, immunity to interference, speed, user acceptance and ease of use are more important.

In order to meet the requirements of the mentioned industries, we set ourselves several main goals. One of these goals is the further development of new and existing BCI hybrid systems. Such hybrid systems, in which BCIs are coupled with other control systems, such as eye or muscle control, are often more efficient, faster, and more accurate than the individual systems - major benefits for a system tailored to everyday use. Another goal is the further development of existing training and classification algorithms used by the software to improve adaptivity and immunity to interference. Finally, we try to increase user acceptance and ease of use by reducing the number of electrodes and using mobile BCI systems. Higher mobility also means that users are not locally bound by the system. In computer games, this allows for greater freedom of movement, while in the industrial environment, it facilitates changing workstations.

In order to achieve the set goals, the M³S project is a cooperation with several partners from research and industry: Under the leadership of Prof. Dr.-Ing. Ivan Volosyak we work together with the industrial partners polyoptics GmbH as well as MediaBlix IIT GmbH and the University of Bielefeld. The project partners contribute essential components and know-how from the fields of optoelectronic production, eye movement control and algorithm optimization by means of machine learning.

The project is funded by the European Regional Development Fund (ERDF) and the state government of North Rhine-Westphalia (grant number IT-1-2-001). The human volunteer trials included in the project were reviewed and approved by the Ethics Committee of the Medical Faculty of the University of Duisburg-Essen. 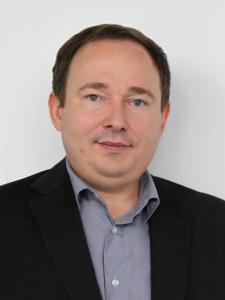