Dr Frank Zimmer, Professor at the Faculty of Communication and Environment, invited primary school kids of ‘Schule am Pappelsee’ to join a very special kind of lecture. 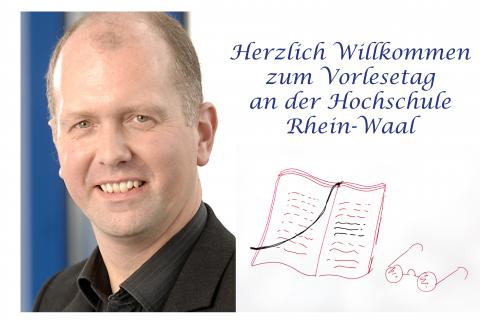 Kamp-Lintfort, November 18, 2016: Pupils were impressed when they got the chance to listen to the stories ‘Fabers Schatz’ by Cornelia Funke and ‘Der Froschkönig’ by Annie M.G. Schmidt in a real lecture hall. Of course they were equipped with pen and paper like real students, made notes or drew pictures to illustrate the stories read by Prof. Zimmer. Finally the young listeners were asked to discuss what they had learned. Judging by the feedback on their writing pads, they thoroughly enjoyed the event.

Apart from Dr Zimmer, many other public figures volunteered to be reading ambassadors during Read Aloud Week. They all welcomed pupils at their working place and read books related to their job or institution. Andreas Kaudelka (Head of Stadtwerke Kamp-Lintfort) read aloud in the customer service centre, Dr Peter Hahnen (Head of the Religious and Cultural Centre) in the treasure room at Kloster Kamp, Dr Christoph Müllmann (City Councillor in Charge of Social Affairs) at the refugee accommodation, René Schneider, Member of the Landtag and Councilor, at the council hall, Michael Rademacher (Head of the Fire Department) at the fire station, Bärbel Bird of Biolandhof Frohnenbruch in Hoerstgen, Karl-Heinz Brandt (Executive Board) at LINEG, Rainer Ullrich, Branch Manager of Sparkasse Duisburg, in his bank, Klaus Deuter (Head of the team “Teaching Tunnel”) at  the former Friedrich-Heinrich colliery, and finally Professor Dr Christoph Landscheidt (Mayor of Kamp-Lintfort) at the city library.

Katharina Gebauer, Head of the City Library in Kamp-Lintfort, has organized Read Aloud Day in cooperation with „Verein Lesart“ to motivate children to enjoy the power of words and to get an insight into the town’s different institutions. Read Aloud Day started in 2013 and has been a great success so far. The Faculty of Communication and Environment at Rhine-Waal University is looking forward to being part of it next year again.