PIKSL, or ‘people-centred interaction and communication for more self-determination in life’, is a project which aims to develop new inclusion strategies for people with disabilities, thus enabling them to live their lives with more autonomy. The scientific importance of the project lies in its high-quality, interdisciplinary R&D collaboration with external partners, but what makes it truly unique is how researchers approach and incorporate people with disability into the project, namely as both reference group and fellow developers. Working in tandem with researchers, people with disabilities contribute to the project’s aims of developing barrier-free solutions in digital communication and technology as equal project partners. This strategy itself represents a revolutionary shift in the usual approach to disability in research. The person with a disability is not seen as someone in need of care, but as a competent partner in deconstructing complex issues. Moreover, through their active participation, people with a disability can demonstrate new methods and solutions for approaching technology to researchers directly. 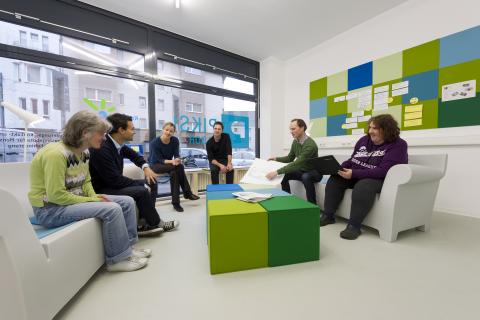 This level of cooperation is particularly important, because PIKSL at its heart is based upon an authentic understanding of the lives of its target users. Without this understanding, it would be impossible to identify users’ needs and derive accurate specifications for devices and use. Integrating users into the development process itself allows researchers to get immediate feedback and make changes and adjustments without long turn-around times. This inclusive approach has already produced significant new insights with regard to the simplification of complex structures (e.g. graphical user interfaces).

One example, developed by student researchers on the project, is a picture board which visually explains how to use a VoIP service like Skype. In creating this visual guide, researchers broke away from users’ usual approach to using these services in order to simplify the instructions in a way that is both effective, concise and understandable for people with cognitive impairments. In addition, PIKSL researchers collaborated with a woodworking workshop in Bethel, Germany, to design a new, more user-friendly interface for a web-based e-commerce solution. New efforts of PIKSL researchers, particularly in the field of assistive technology for people with a disability, are currently being planned or already underway.

PIKSL researchers are also actively collaborating with social scientists from the Universität Siegen in order to better identify and evaluate the prerequisites, impact and potential of modern communication and information technology for people with cognitive impairments. PIKSL is supported financially, among others, by the Diakonie Düsseldorf and the foundations Stiftung Wohlfahrtspflege NRW and Bodelschwinghsche Stiftung Bethel. PIKSL researchers were officially recognised for their work in 2012 as part of ‘365 Orte im Land der Ideen’ (365 locations in the Land of Ideas), a nation-wide research competition organised by the German research initiative ‘Deutschland – Land der Ideen’. Under the patronage of the Federal President of Germany and the Deutsche Bank, the initiative annually recognises 365 exemplary projects and ideas which strive to make lasting contributions to the future prosperity and competitiveness of Germany. PIKSL was recognised a second time in 2012 as an ‘Ort des Fortschritts’ (location of progress), and in 2014 when it won the award ‘Zero Project – for a world without barriers’.