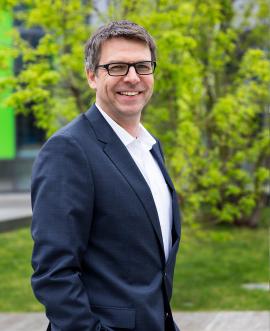 Dr Oliver Locker-Grütjen has held the office of President of Rhine-Waal University of Applied Sciences since 2019. His goals at Rhine-Waal University, with its two locations in Kleve and Kamp-Lintfort, include strengthening its position as a university of applied sciences by promoting a holistic combination of teaching, research and knowledge transfer inspired by the Humboldtian model of higher education; strengthening its regional ties while also expanding national and international partnerships; promoting diversity in the student body and advancing the concept of sustainability, for example by integrating it into every degree programme and establishing a new European Centre for Sustainable Transformation.

Before becoming President of Rhine-Waal University of Applied Sciences, Oliver Locker-Grütjen spent 20 years in various roles at the University of Duisburg-Essen (UDE). He began his tenure there as personal advisor to the rector from 2000 to 2002. During this time he was directly involved with the fusion process between the Universities of Duisburg and Essen which resulted in the new UDE. In 2003 he became managing director of the new Research Centre for Microscale Ecosystems (ZMU), laying both the groundwork and developing its research profile while continuing the development of the Centre for Medical Biotechnology (ZMB). Both research centres have become two recognised pillars of the UDE’s overall research profile and academic landscape. From September 2007 to June 2008 he led the UDE’s Department of Research and Development. Afterwards, he became Academic Director of the Science Support Center (SSC), a position he held until May 2019. Here he was responsible for the areas of research strategies, promotion and transfer, as well as efforts to recruit and mentor early-career researchers. During this time he also ran the Prorectorate of Research, Early Career Researchers and Knowledge Transfer as managing director.

Oliver Locker-Grütjen is active as both a researcher and an advocate for higher education in regional networks as well as national committees and organisations. In July 2021, for example, he was appointed to the Commission for Research Data and Information (KFiD) of the Joint Science Conference (GWK). In addition, he is an active member of the State Rectors’ Conference of North Rhine-Westphalia (LRK), where he has led a working groups on new teacher training and the future of higher education in Germany post-pandemic since 2020. He has also been a member of the Scientific Advisory Board for Research and Transfer Management (FORTRAMA) at the University of Göttingen since 2016. He has also been a jury member for the German Industrial Foundation (sdw) since 2007, focusing his efforts primarily on early-career researchers and doctoral candidates.

Since 2016 Oliver Locker-Grütjen has been welcomed as a visiting professor at the Centre for Research Management (ZWM) in Speyer, Germany. In addition, he has taught at Osnabrück University of Applied Sciences as well as in the Department of Intramural Professional Development at the University of Mainz. Oliver Locker-Grütjen has contributed to various audits conducted by the Association for the Promotion of German Sciences and Humanities (Stifterverband der Deutschen Wissenschaft) as well as the Federal Ministry of Education and Research of Germany.

Oliver Locker-Grütjen began his academic career with a degree (Diplom) in ecology, eventually going on to earn his doctorate in 2012 with a dissertation on the framework conditions for research at German universities.

He has published, and continues to publish, numerous articles in the fields of biology, environmental sciences, education and pedagogy, science management and higher education development.

He is a native of Duisburg, Germany, and married with three children.